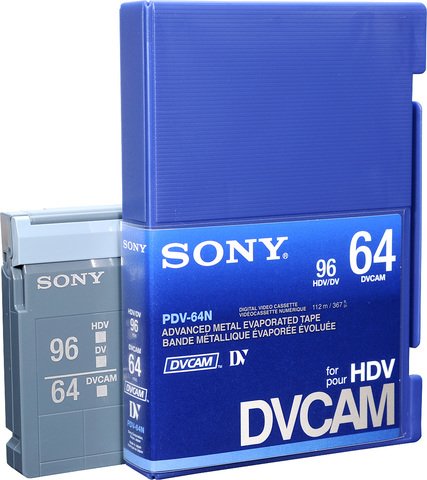 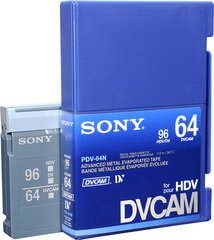 DVCAM tapes from Sony offer all the professional features expected with a tape of this caliber. With 50% fewer dropouts, a 30% stronger tape, and less tape shrinkage than consumer dv tapes, the 64N tape will stand up during shooting, even in extreme environments.

Sony DVCAM tapes feature an Advance Metal Evaporated (AME) Technology. This technology makes the tape more durable and reduces the amount of dropouts that may cause problems later on in the editing process.

Sony DVCAM tapes also have a Diamond-Like Carbon coating to make the tape stronger than that of consumer dv tapes. A stronger tape means better performance during Pause and Freeze Frame operations and less shrinkage over time. With minimal shrinkage the tape will be widely machine compatible and good for long term storage. Tracking and playback will be consistent throughout the life of the tape.

The Advantages of DVCAM

DVCAM refers to a type of DV format, a variation of the DV (Digital Format) standard technology. It uses the same DV recording system as standard DV; that is a superior codec (for compressing and decompressing data) and tape recording system. However, DVCAM is more targeted towards professionals who work with videotape on a daily basis. While DVCAM keeps the same high standards of traditional digital video recording on tape, it actually records video and audio using Hi8 tape. This means High-Band Video8, a type of recording technology that uses improved recorder electronics and media-formulation so that viewers get a higher degree of detail in replayed images.

DVCAM uses the same videocassette tapes as standard DV and mini DV camcorders. However, because of the way DVCAM systems are built they can transport the tape about 33% faster than ordinary DV cameras. Additional advantages include a higher track width, the same type of codec used for standard DV and a lower chance of dropout errors. The fact that DVCAM has a wider track means that it can allow for a frame accurate insert tape edit feature. DVCAM also has protection against drifting audio (which is common after you make several copies of copies of original footage) because it locks the audio. The only side note to be aware of when comparing DVCAM to other DV systems is that DVCAM cameras only support Standard Play, which will cut down the full potential of tapes that are made with EP/LP technology.

What is the difference between DV, DVCAM and DVCPRO? They are very similar in operation, and actually, the basic video encoding algorithm is the same in all of the formats. That's not to say that there's no difference in picture quality-naturally an expensive camcorder is going to record a better image because it has superior lenses and camera features. However, a cheap DV will still record the same video data as the other two formats. (Note that the setup may not be identical)

DVCAM can improve the quality of your productions, whether you are breaking into video journalism, want to make short films or just want to watch yourself perform Shakespeare with a spotlight.