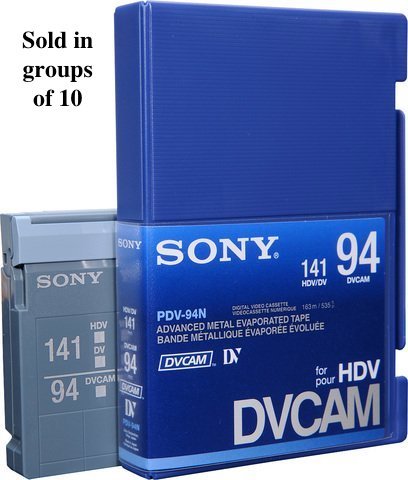 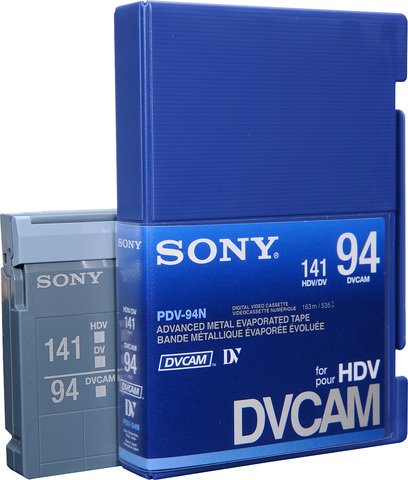 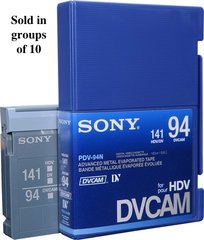 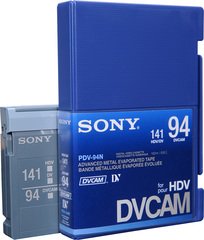 DVCAM tapes from Sony are a perfect professional format for all your video needs. Created by Sony, DVCAM tapes come in a rugged, locking album case and feature advanced coatings to make the tape operate smoothly.

The PDV-94N/3 offers 50% fewer dropouts than consumer dv tapes. With the Advance Metal Evaporated (AME) Technology the DVCAM tape is more durable and offers reduced hiccups that would potentially cause problems with your footage.

An advanced Diamond-Like Carbon coating on the tape makes it 30% stronger than consumer dv tape and offers 50% less tape shrinkage. Stronger tape makes Pause and Freeze Frame operations a snap! With less tape shrinkage a DVCAM tape will be more reliable in long term storage and more consistent in tracking and playback.

What Are the Differences Between DV, DVCAM and DVCPRO?

All of these systems are a type of DV technology, which refers to a digital video format, both the codec and the video tape recording. DVCAM is a variation on the DV that allows the transfer to move faster, up to 33% faster. It appeals to professionals who want to make use of the wider track width and frame accurate insert tape editing features. Audio features are also improved on the DVCAM. DV appeals to more everyday people who want the camera for home movies and for traveling exterior footage, such as video journalists.

What about the DVCPRO? Whereas DV and DVCAM were discovered by more than one company (though DVCAM is mainly associated with Sony) DVCPRO is Panasonic's baby, and it was specifically made for electronic newsgathering. DVCPRO has superior linear editing capabilities than the other systems. Its track is width is greater than that of the DVCAM, measuring 18 micrometers. It also uses a superior tape, namely a metal particle, as opposed to a metal evaporated type. Lastly, the tape offers a longitudinal analog audio cue track. Besides these features, DVCPRO is actually identical to a standard DV recorder, at least when it comes to bit stream level and how the video data is recorded.

What's similar about all of these products is that the same basic video-encoding algorithm is used between all formats. In fact, even the most expensive VTR cameras actually record the same image as the cheapest DV camcorder. This does not mean you will actually get the same quality of image-of course not! Why else would some companies charge upwards of $15,000 if that were the case? No, there are definitely some differences in the quality of lenses and in the superior technology of the camera. However, all of these systems share the same technology and the same basic method of video tape recording.

DV camcorders are the least expensive and ideal for home use. DVCAM cameras offer more features and are of interest to serious and aspiring cameramen, perhaps even filmmakers. DVCPRO cassettes are mainly tailored to newsgathering and features some industry standard editing options. These major differences and similarities may help you to see the clear picture.