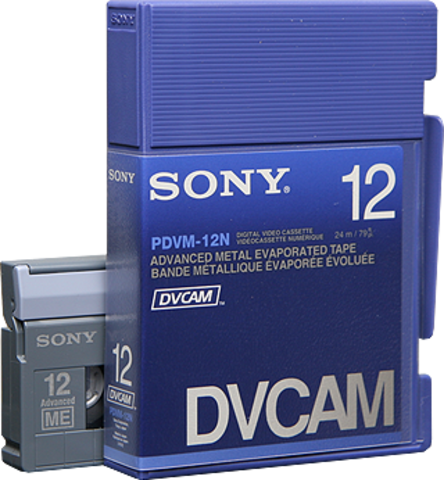 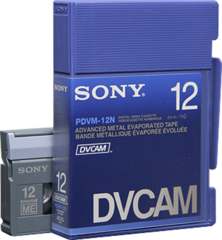 Item has been discontinued by the manufacturer, and limited quantities remain. Please call 877-893-8273 with any questions.

DVCAM cassettes from Sony are ideal for professional applications and feature a strong tape to yield fewer dropouts and minimal tape shrinkage. They also come in a rugged album case to protect the cassette during shooting.

With 50% fewer dropouts, Sony DVCAM tapes are ideal for professional video applications. Sony's Advanced Metal Evaporated (AME) Technology makes the tape more durable and reduces the amount of defects that could cause problems later on during the editing process.

Why You Should Buy a DVCAM Camcorder

Why should you buy a DVCAM instead of a cheaper DV video camcorder? DVCAM is actually a type of DV camera - a variation on the basic design. Both a standard DV camcorder and a DVCAM camcorder use the same codec and tape recording system, but a DVCAM is programmed in a different way. The major difference is that DVCAMs tend to offer more features that will be of interest to working professionals. DVCAM also uses High-Band Video8 (hi8) technology for recording, which allows for more detail in captured footage.

DVCAMs use the same tapes as standard DV and Mini DV camcorders, so there's never any worry about having to buy another recorder just to have interchanging ability. The main advantage of these recorders is that they can transport the DVCAM tape about 33% faster than ordinary DV cameras. They also have a higher track width and pitch, with a lower chance of dropout errors. These systems are the most preferred for editing capability, and this is a major reason why DVCAMs have been marketed to video professionals. Another interesting feature about the DVCAM is that it provides audio lock as a means of protection against drifting audio that occurs with making multiple copies.

A DVCAM uses tape stock that is much stronger and more durable. Therefore, it's safe to say that DVCAM tapes (specially made for DVCAM, though all DV recorders are compatible with one another) will have a longer life than most MiniDV tapes. DVCAM footage is also of higher quality because the camera has a wider track width and pitch. This ensures that footage is less likely to suffer from digital dropout.

DVCAM also offers a more reliable time code signal and can set time code numbers; something that the average DV camcorder cannot do. Finally, DVCAM tape stock can be recorded on over and over again, in ways that a DVD, CD, VHS tape or many other mediums cannot. Unfortunately, mini DV tapes also cannot match this level of continual recording. As you can see, the DVCAM offers several advantages to the professional who is anxious to see enhanced capabilities from his recording system.